At the heart of the Geneva School of Diplomacy’s concept is the students’ learning experience from leading academics and practitioners of international affairs. The vast majority of the faculty members have terminal degrees within their field of expertise.  The Geneva School of Diplomacy has an excellent and growing reputation for the high level of its academic staff – including six ambassadors, a former head-of-state and a Nobel Peace Prize nominee. They instruct, research, and publish in both classic and cutting edge areas in the field of International Relations.

We are committed to bridging the gap between theory and practice in the field of International Relations. In addition to GSD’s renowned faculty, serving Ambassadors and other members of the diplomatic neighborhood, representatives from the International Organisations as well as high-level experts on cutting edge issues are regularly invited to share their invaluable knowledge and experience with the students.

The Geneva School of Diplomacy has traditionally focused on training world class international public and private sector leaders who will influence the world in a more human and productive direction.

Teaching staff of the Geneva School of Diplomacy & International Relations employ a number of methods of instruction. Consistent with the School’s quality assurance and enhancement practices, each method is designed to ensure that the student derives maximum benefit from the lectures and seminars, and that he/she uses independent study time to its full advantage.

Because of the small class sizes, students are offered the chance to personally interact with faculty and co-students on a high level and develop long lasting and sometimes life-changing relationships. 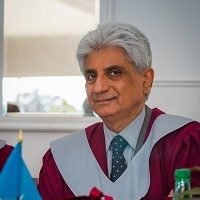 Dean at Geneva School of Diplomacy

Dr. Sultan-Khan is currently the Special Advisor on Diplomatic Matters to the United Nations High Commissioner for Refugees (UNHCR). Prior to that, he served as Chef de Cabinet to three consecutive High Commissioners at UNHCR and held a succession of positions in UNHCR in the field and at Headquarters. His progressive experience with UNHCR provided him with an authoritative knowledge of diplomatic protocol, keen political awareness and skill-ful use of multilateral diplomacy in politically complex and sensitive situations of forcibly displaced people. Dr. Sultan-Khan’s renowned contribution to humanity is based on his unique mastery of refugee issues garnered over the last three and a half decades.

Professor Sultan-Khan’s term of office as GSD Honorary Dean will commence on 1 January 2017 and finish on 31 December 2017. Dr. Sultan-Khan will be away on mission to the UN in New York on secondment from UNHCR for the period of 1 January 2017 to 31 March 2017. During his absence, the Honorary Vice Dean of GSD, will be acting honorary Dean.

A Pakistani national of dual Swiss citizenship, Dr. Sultan-Khan was born in Brussels and studied in Geneva and New York. He joined the United Nations right after his graduation with a Master of International Affairs from Columbia University. He and his wife Cornelia have one son.

Payment - Bachelor of arts in IR

Bachelor of Arts in International Relations